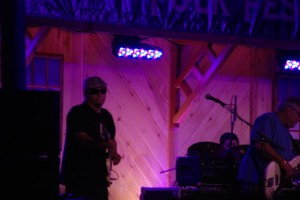 The skies threatened to open late Saturday afternoon but the deluge never came as just a brief shower and cooling winds descended on the 2011 Four Corners Folk Festival in Pagosa Springs. But whatever relief from the heat we experienced quickly dissapated as Los Lobos took the stage as Saturday’s headline act. The entire crowd was on their feet under the big tent and a huge crowd danced feverishly on either side of the tent. I had to set my tripod atop several chairs just to get a vantage point above the crowd. Below is the video I shot of Los Lobos’ encore songs that followed a raucous crowd ovation.  It’s over 15 minutes long because I couldn’t figure out a place to stop recording without missing some of the next song they performed. “La Bamba is at minute 5:36.

I recommend hitting play and then pausing the playback until the stream is complete for best playback.